We’re entering the final few weeks of the Premier League season and there’s some big names set to miss the title run-in.

We already know all about Harry Kane and his cardboard ankles, but there’s a couple of other Dream Team favourites on the sidelines this weekend and beyond… 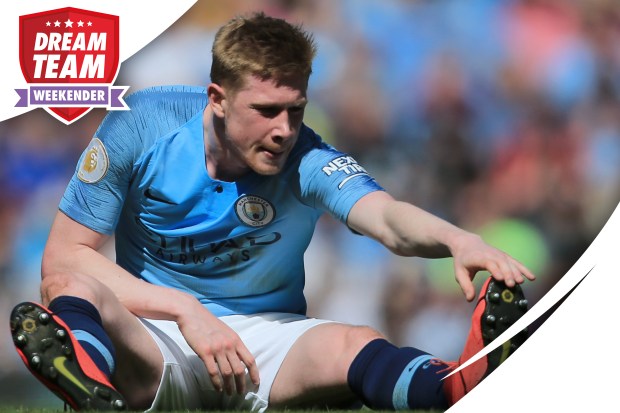 It’s been a season of injury misery for KDB, which has seen him start just 11 Premier League games for Man City.

And it’s only getting worse, as the Belgian was substituted in the first half of City’s win over Spurs last weekend for what appears to be a hamstring tear.

Pep Guardiola has not ruled De Bruyne out for the rest of the season just yet – saying he’s hoping for ‘one or two more games’ from him – but he’s definitely missing the trip to Burnley on Sunday.

After breaking into Chelsea’s first-team (not to mention Gareth Southgate’s England plans), CHO has slowly become a bit of a Dream Team favourite.

But the bubble burst last Monday when he was taken off before halftime in the Blues’ 2-2 draw with Burnley – with the club later confirming the youngster had ruptured his Achilles tendon, meaning he will definitely miss the remainder of the season.

Jones is well and truly in the dog house at the moment following Man United’s woeful run of form, and after missing the midweek derby defeat to City it seems the centre-back will miss out on the crunch game with Chelsea on Sunday through injury.

Everton’s main man went off with a suspected rib injury in their win over Man United last weekend, and the Toffees are yet to confirm whether he’ll be fit enough for their upcoming game against Crystal Palace.

But the chances seem pretty high that he will at the least make the substitutes bench.

PEA missed out on Arsenal’s 3-1 slump to Wolves during the week but is in contention for their match against Leicester on Sunday.

The Premier League’s joint top scorer missed Wednesday’s defeat after undergoing what his club termed ‘ a small procedure on a sinus’.

Sounds nasty, but we imagine he’ll be back among the squad for their trip to the King Power.

Rudiger has been out for almost two weeks with a knee issue, but Chelsea believe he will be ready for Sunday’s clash with Man United.

Kante is still a doubt with a back complaint, but he should be able to recover for United.