The Dream Team favourite will be on the sidelines for Spurs game against Huddersfield this weekend and looks set to miss the rest of the season after picking up a nasty ankle injury against Man City during the week.

With that in mind, we’re taking a look at which players are either definitely out or major doubts for the upcoming games…

You must remember to make transfers for Game Week 32 BEFORE tonight’s game between Leicester and Newcastle. 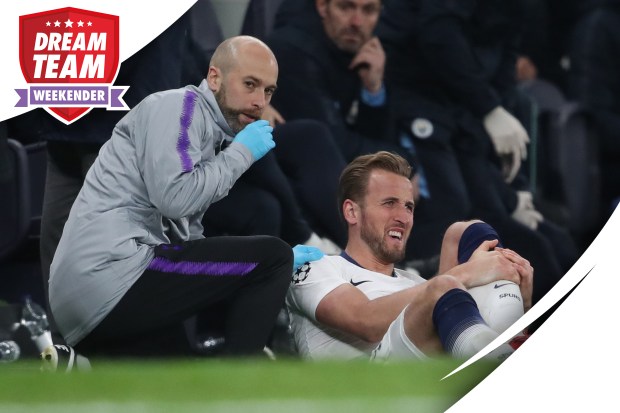 Kane remains one of the most-selected strikers on Dream Team this season, with over 33% of you opting for the Spurs striker in attack.

But after limping off during the midweek win over City in the Champions League, the club have confirmed that Kane suffered a “significant” lateral ligament injury to his left ankle, which could see him miss the rest of the season.

Kane was ruled out for almost two months back in January when he damaged ligaments in the same ankle during Spurs’ defeat to Man United, so it’s definitely time to transfer him out…

As if Spurs didn’t have enough problems with Kane’s injury, it looks as if Alli could also miss their weekend clash with Huddersfield too.

The midfielder suffered a fractured hand in the win over City and while that’s not nearly as bad as Kane’s ankle knock, it could keep him out for Game Week 32.

It will certainly be touch and go until kick-off.

Silva was a surprise absentee from City’s Champions League clash after suffering a muscular injury, but it looks as if he and Oleksandr Zinchenko could return to the side for their Sunday trip to Crystal Palace after Pep Guardiola told reporters on Friday that the pair are “feeling better”.

Keep an eye on this one.

Which team has produced the most Dream Team points this season?

Which players will score the most points in Game Week 8?

Bernardo Silva is one of the most underrated players in Europe - why?