Find yourself someone who loves you the way Pep Guardiola loves Bernardo Silva.

The Portuguese midfielder has been simply brilliant for Man City this season, playing with the sort of consistency and guile that has really made him stand out for the title-hopefuls.

And as we reach the last couple of months of the season, we think he could be just as useful for your Dream Team. 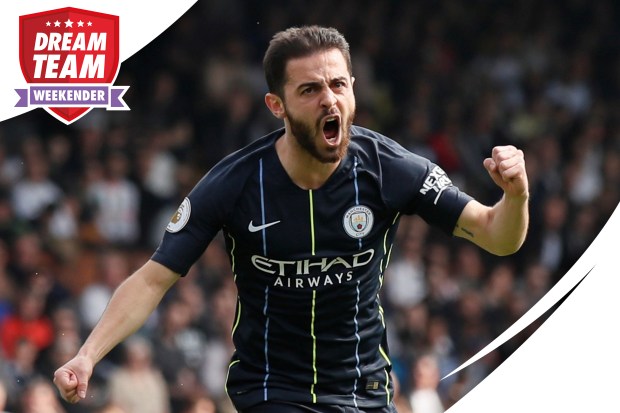 Following City’s 2-0 win over Fulham at the weekend, Guardiola was positively gushing over Silva.

Speaking after the match, he said: “What Bernardo has done this season is a consequence of the way he accepts his role.

“He works so hard and the rewards are there. Right now with the way he plays I cannot do anything else but put him on the pitch and let him play.

“He’s so important for us. What he’s done for us is the best.”

Silva absolutely bossed the game at Craven Cottage by netting the opener after just five minutes before setting up Sergio Aguero for the second goal, which means he took home the Star Man award and 15 points for Game Week 30.

His recent points haul – which has averaged at 4.4 per game this season – means he’s crept into the top 10 highest scorers on Dream Team with 180 points, better than the likes Paul Pogba and Andrew Robertson.

So with all of that in mind, how come so few of you have decided to pick him this season?

At present he’s only in 13.7% of teams, which is far lower than any of the players around him at the top end of Dream Team’s player rankings.

Perhaps some of you still believe he’s merely a back-up to the first-team?

While that was true in the early stages of last season, it’s simply not the case these days.

With his versatility, Silva’s often picked on the wing, behind the forward, or in the midfield of Pep’s side and he’s certainly ahead of the likes of Leroy Sane, Riyad Mahrez and even the injury-prone Kevin De Bruyne in the pecking order.

His lack of popularity on our game also means he’s pretty cheap right now, coming in at just £3.9m which is a lot less than other midfielders like Mahrez (£4.7m), David Silva (£4.7m), Gylfi Sigurdsson (£4.6m) and Christian Eriksen (£4.8m), even though he’s scored more points than all of them.

As City chase an unfathomable quadruple in their remaining games, perhaps it’s time to invest in their secret weapon for your own Dream Team title race?