But it wasn’t all bad news, as we finally added two HUGE Dream Team favourites to the game as they each returned from lengthy injury lay-offs. 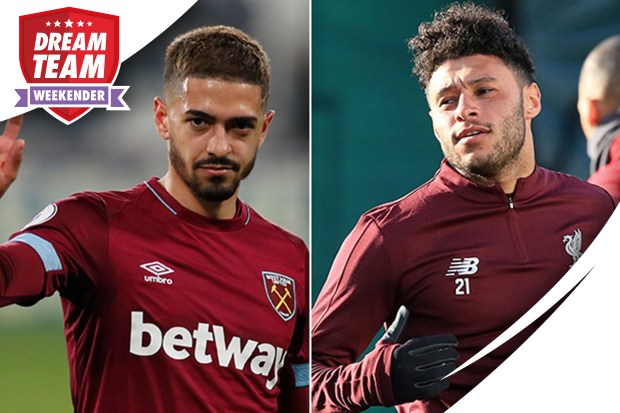 Friday night saw West Ham hero Manuel Lanzini make his long-awaited return to the pitch in their win over Fulham.

The Argentinean came off the bench in the 76th minute at the London Stadium to a rupturous applause, having been out of action since before the start of the World Cup.

His return means you can start considering him for your Dream Team again, as we’ve re-added him to the game with a very reasonable price of £2.5m.

We’ve also added Liverpool midfielder Alex Oxlade-Chamberlain to the game, as he’s nearing the end of his own injury nightmare.

The Ox sustained ligament damage in the Reds’ Champions League win over Roma back in April and hasn’t been seen since; missing both the Champions League final and England’s World Cup campaign.

But after 10 months out, Ox is said to be close to returning to the first team and is reportedly injury-free, having gradually returned to training activities with the club.

This duo could make all the difference to your fantasy football team at this crucial stage of the season.

Lanzini was a bit of a Dream Team hero towards the end of last season, finishing up with 79 points to his name as he netted twice in their final game of the campaign.

Hammers boss Manuel Pellegrini has insisted he won’t rush the tricky midfielder back to the starting line-up straight away, but there’s no doubt the No.10 will have a big part to play over the next few weeks and months.

Oxlade-Chamberlain’s approaching return could be huge for Liverpool, with the Reds still fighting it out for the Premier League title and the Champions League.

He’s already been added to the Reds’ Champions League squad and could be part of the team that travels to Germany for the second-leg of their last-16 tie against Bayern Munich on March 13.

But perhaps a more likely return target for him is their home clash with Spurs on March 31; a match that could possibly go down as a defining moment in the title race.

Like Lanzini, we’ve priced the Ox at £2.5m on the game, making him one of the best Dream Team bargain midfielders in the current top six.

Last season, he finished up with 101 points after becoming a first-team regular in Jurgen Klopp’s midfield, racking up five goals and eight assists, as well as 16 7+ ratings on WhoScored.

Well worth your small change, we reckon.