We finally got to see Gonzalo Higuain in the blue shirt of Chelsea on Sunday.

Starting in their FA Cup mismatch against Sheffield Wednesday, the Argentinian played 81 minutes before being substituted off for Olivier Giroud.

No, he didn’t score on his debut, but the former Napoli and Juventus forward certainly impressed with his movement on and off the ball; something Chelsea fans have seldom seen from a striker for a while.

But is it time we gambled on sticking the new boy into our Dream Team line-up?

After completing his loan move from Juventus last week, we quickly added Higuain to Dream Team and gave him the enticing price of £4.5m.

To put that into perspective, he’s cheaper than the likes of Alexandre Lacazette (£4.8m) and Romelu Lukaku (£4.7m), but slightly more than fantasy football favourites Callum Wilson (£4.3m) and Gabriel Jesus (£4.2m).

Higuain’s career has been all about goals.

In fact, he’s scored over 300 goals in his career and at one point was widely considered the deadliest striker in the world.

As recently as the 2015/16 season, he broke the record for the most amount of goals scored in a single Serie A campaign when he was at Napoli – under the tutelage of current Chelsea boss Maurizio Sarri.

Even before then, Higuain was a renowned marksman, finishing the 2009/10 season at Real Madrid as the club’s top scorer with 27 goals, with only Lionel Messi netting more in the Spanish top flight that year.

Being a top scorer in both Spain and Italy is certainly no mean feat.

But, of course, we can’t talk about Higuain without bringing up the elephant in the room.

In more than one high-profile clash – including Argentina’s 2014 World Cup final against Germany – Higuain has often fluffed his lines when handed golden opportunities.

Sadly, his career portfolio is littered with unforgettably forgettable moments and these days his reputation for ‘bottling it’ seems to outweigh his goal-scoring feats. 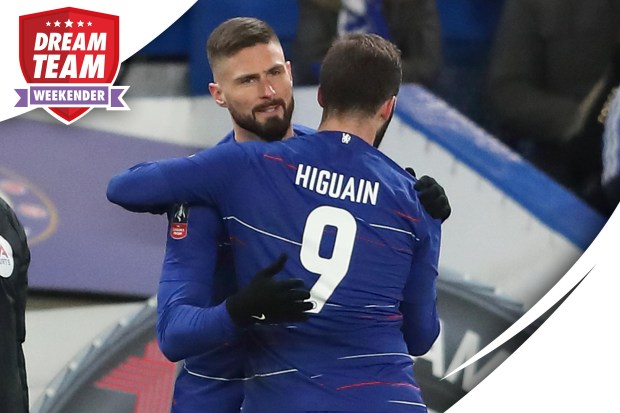 We also need to take a look at his brief spell at Milan in the first half of this season.

Higuain joined the Rossoneri back in the summer after Juventus snapped up Cristiano Ronaldo, but he only managed to score eight times in 22 games at the San Siro.

Unfortunately, his most memorable Milan moment came in their 2-0 defeat to Juve back in November, when he missed the chance to equalise against his parent club from the penalty spot.

He capped off his run out by getting sent off in the final few minutes for picking up two yellow cards.

Perhaps we should forget about his ill-fated time in Milan, because Sarri is certainly one man who can muster the very best out of Higuain.

As we said above, the powerful forward had his best season under the chain-smoking Italian and certainly seems to be well-suited to his style of play.

If Higuain is to succeed in England, then he’s certainly working under the right man.

In the game at the weekend, it looked as if he was already getting to grips with the Blues style of play and has seemingly started to bond with his new teammates – evident from his passionate display following their win over Spurs in the Carabao Cup.

His first Premier League appearance will be against Bournemouth on Wednesday, followed by their home clash with Huddersfield at the weekend.

In February, he’ll be key to Chelsea’s two-legged run out against Malmo in the Europa League (yes, he is eligible to play in the European competition, which is great news) and he’ll relish the upcoming FA Cup fifth-round match with Man United and the Carabao Cup final against Man City.

Fantasy football fans should certainly keep their eye on him over the coming weeks.