If your name is Claude Puel then look away as we’re about to mention Wolves’ win at the weekend.

Diogo Jota was the star of the dramatic 4-3 victory over Leicester and the Portuguese is ready to give you a serious Dream Team selection headache. 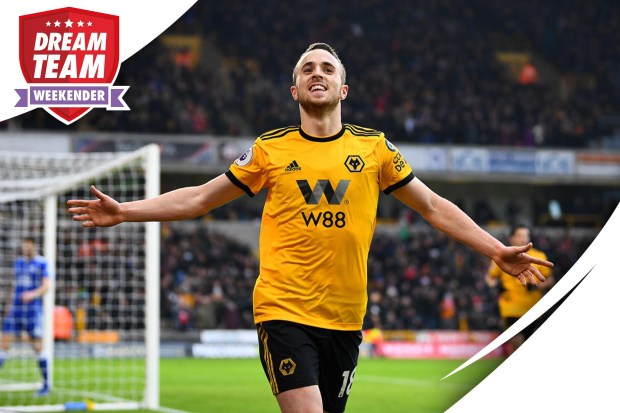 Jota reintroduced himself to the Premier League after a spell out injured with a stunning hat-trick against Leicester at Molineux in Game Week 21.

His three goals and Star Man performance against the Foxes might have gifted him with a mouthwatering 27 points but it’s something else that has caught our attention.

The 22-year-old is actually listed as a midfielder on Dream Team despite naturally being more of a second striker or attack-minded winger.

Similarly to Callum Patterson and Ricardo Pereira, both of whom actually play further forward than their Dream Team positions suggest, Jota is another hack player who looks like a smart option.

The former Atletico Madrid and Porto man has five goals and two assists to show for his efforts this season, combining to give him a respectable 42 points on Dream Team as it stands.

Nuno Espirito Santo has changed his system in recent weeks in favour of a two-pronged attack which will be music to the ears of a now injury-free and goal-hungry Jota.

Espirito Santo will hope that his countryman can ease the scoring burden on Raul Jimenez and help Wolves in their ambitious pursuit of a Europa League spot.

Jota comes with an enticing price tag of just £1.3m on Dream Team after a decrease from £2m during his spell on the sidelines.

The in-form star will back himself to continue his good form in several favourable looking fixtures for Wolves in the coming weeks, starting with the FA Cup 4th round meeting with Shrewsbury.

Wolves then welcome West Ham and Newcastle to Molineux either side of a visit to Everton, before finishing the month with clashes against Bournemouth and Huddersfield.

So far, less than 1% of Dream Team managers are aware of the game’s latest hack player and have put their faith in the undercover striker.

Why not get ahead of the crowd?