At present, many of you still have a rather large Kane-shaped gap in your fantasy football team (37.2%, in fact)  that desperately needs to be filled.

As you know, Man United have been in wicked form under Ole Gunnar Solskjaer; winning all SEVEN of their games with the blue-eyed Norwegian.

And Rashford has perhaps been United’s most-improved player in recent weeks, which makes us think it’s time to seriously consider picking him for your team.

The 21-year-old made his 150th appearance for his boyhood club on Saturday and celebrated the occasion by netting his fifth Premier League goal under Solskjaer – bringing his total for the season up to nine goals in all competitions.

But what we’re most interested in is his Dream Team points total, which has just ticked past 100 points for the season – he’s on 104 points, to be exact – with a stunning 54 of those earned since Solskjaer’s first game in charge.

After the win over Brighton on Saturday, Solskjaer said Rashford is “playing the best football of his career” and we completely agree.

Rashford seems to be relishing his chance as a No.9, racking up more shots, 26, in 502 minutes of football under his new manager than the measly 19 he managed in 846 minutes under Mourinho.

He’s only getting better too, as he finished up with a WhoScored rating of 8.40 in the match against Brighton – the highest he’s got up under Solskjaer so far.

And that was good enough to see him pick up his first Star Man award of the season, which we all know means an extra bonus of +5 Dream Team points. 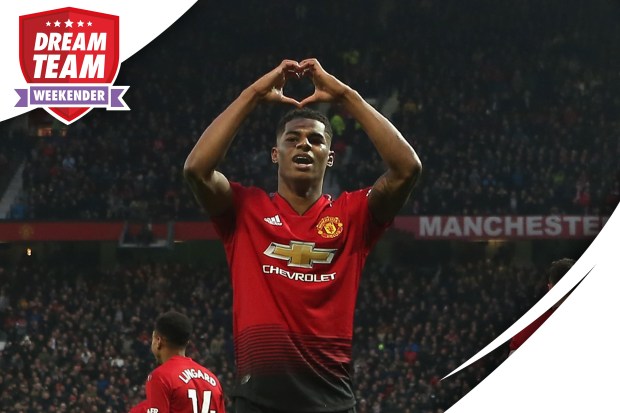 The thing is, Rashford has never really been a Dream Team favourite.

His lack of regular starting opportunities under Mourinho made us distinctly wary of selecting him for fantasy football, while he’s never truly been a prolific goal-scorer… until now.

Indeed, we’ve seen a spike in Dream Team managers selecting Rashford for their team over the last two weeks, but he’s still only gracing about 16% of teams.

We think that needs to change.

He’s also proven to be a first-team regular under Solskjaer, which is less than what Lukaku and Morata can say, eh?

What’s more, we think now is the perfect time to pick Rashy, as after United’s FA Cup clash with Arsenal on Friday – which is a fixture Rashford often performs well in – United face Burnley, Leicester and Fulham, before their big one against PSG.

It could be a very fruitful few weeks for the England starlet, as there’s not too many forwards in better form right now.