Ah the sweet embrace of the Premier League.

Yes the Barclays is back after the first international break of the season which means heads turn to fantasy football again.

And we’ve got some refreshing news for those of you who are already lagging behind in the Season game. 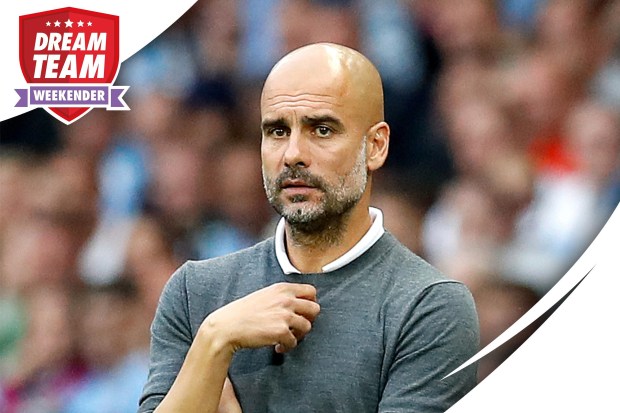 That’s because Dream Team Weekender is simply the easiest way to play fantasy football – and there’s a whopping £10k jackpot up for grabs this weekend.

All you need to do is pick seven players from the Saturday and Sunday games with no budget limitations to worry about.

And to give you guys a nudge in the right direction, our Dream Team experts are on hand to run the rule over the best selections this weekend.

Adam Jones has put all his eggs in two baskets, namely Chelsea and Man City.

Tottenham and Liverpool do battle in the game of the weekend so he’s avoided both sets of players simply because the clash is too close to call.

Instead he’s backing Chelsea and Man City to both turn over Cardiff and Fulham respectively, picking three players from each side.

Bournemouth’s Callum Wilson, who has 25 Dream Team points so far, is the sole representative from outside those two clubs as the Cherries face Leicester.

Nick Elliott says Cardiff are allergic to goals at the best times so a trip to Stamford Bridge screams Chelsea clean sheet.

Fulham may be bold at the Etihad as parking the bus doesn’t suit them, so an open game equals goals and City’s all-time top scorer rarely misses out.

Michael Golson fancies Chelsea and Kepa to keep a clean-sheet against goal-shy Cardiff this weekend, while his back-line is all about points-scoring left-backs.

With Spurs missing their goalkeeper Hugo Lloris, Sadio Mane will be licking his lips at the prospect of travelling to Wembley and the prospect of adding to his four goals this season.

He also predicts Watford’s great start to the season will continue as they take on stuttering Man United, with Troy Deeney the man to bully Mourinho’s back-line.

The best bit about Weekender? If you don’t win this week, you’ve only got to wait until next weekend for another shot at a massive jackpot.