The World Cup is nearly upon us, which means you really need to start thinking about your fantasy football team.

Our game is completely free to enter and will run from the opening game on June 14 right up until when England inevitably lift the trophy in the final on July 15. 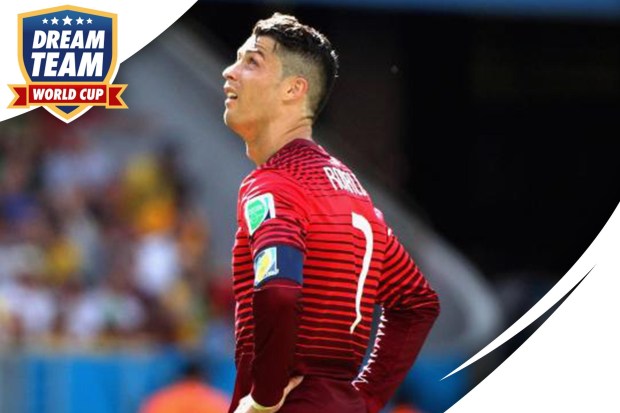 In the meantime, we’re taking a good look back at the last World Cup back in 2014.

Germany won, Brazil got absolutely battered on home soil in the semi-finals and England… well, let’s not go there.

But amongst all that, a certain Cristiano Ronaldo had a particuarly torrid old time.

The Real Madrid superstar notched a lousy FIVE points as Portugal failed to make it out of the group stage; assisting an injury-time equaliser against USA and scoring a late match-winning goal in a 2-1 victory over Ghana.

In fact, a small army of players had a far better tournament than the five-time Ballon d’Or winner, including this lot…

A cult hero among Celtic supporters, Samaras is also remembered rather fondly for his efforts with the national team.

Back in 2014, he was the focal point of Greece’s attack and helped lead his country to the last 16 of the World Cup for the first time in their history (before they lost out to Costa Rica on penalties).

And it was largely thanks to him that they made it that far, as he set-up the first goal and then netted the winner from the penalty spot in their dramatic 2-1 win over Ivory Coast in the final group game.

Back in 2014, Shaw was hot property after a blistering season with the Saints and even managed to get in ahead of the once immovable Ashley Cole in England’s World Cup squad.

But even so, the 18-year-old left-back was behind Leighton Baines in the Three Lions’ pecking order and had to make do with a place on the bench for the first two games of Group D against Italy and Uruguay.

Inevitably, England were already out by the final game against Costa Rica, so Shaw was given the nod in a meaninglessness 0-0 draw that we’re pretty sure nobody watched.

Arsenal fans won’t remember this guy too fondly, but he was an important part of Ivory Coast’s attacking line-up at the last World Cup.

You don’t believe us, do you?

Well, he managed two goals in the group stage – the winner in their 2-1 victory over Japan and the only goal in their 2-1 defeat to Colombia – but couldn’t quite help them reach the last 16.

From one Arsenal favourite to another.

It might be hard to fathom nowadays, but Debuchy was France’s go-to guy at right-back back in 2014.

So much so that he played every minute of four of France’s five matches as they reached the quarter-finals (he was rested in the final group match against Ecuador) and was probably a very decent pick for your Dream Team, as he kept three clean-sheets.

Who’s the only American player to score in three consecutive World Cups?

Dempsey had an exceptional tournament in Brazil, scoring twice as the USA went all the way to the last 16, far exceeding expectations.

We’re hardly surprised really, considering how brilliant he was for Fulham back in the day.

Just a shame he likes to call it ‘soccer’.

Ruiz was one of the surprise stars in Brazil four years ago, helping Costa Rica to the top of Group D (ahead of England, Italy and Uruguay, no less) and onto the quarter-finals, netting against Italy and Greece along the way.

He’s naturally made Costa Rica’s World Cup squad this time around too, and will be hoping to add to his 110 caps in Russia.

Four years ago, it seems sticking an Aston Villa defender into your Dream Team was one of the smartest moves you could make.

Vlaar played all seven matches of the Netherlands run to the semi-finals and received plenty of credit along the way.

Playing alongside the likes of Stefan de Vrij and Daley Blind, he was part of a back-line that conceded just four-goals as Louis van Gaal’s side eventually finished in third-place.

But despite his performances that summer, he stuck around with Villa for another year before heading back to AZ Alkmaar.