Better still, it’s completely free to enter with a marvellous £175k prizepot to be won. 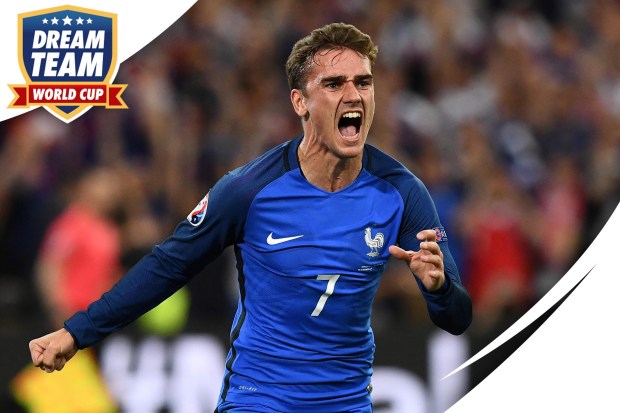 But if your Dream Team World Cup side is going to be successful, you’re going to need to make a couple of sacrifices.

After all, you only get a transfer budget of £50 million on the game, which means you sometimes need to find a bargain or two to balance the books.

But that’s not necessarily a bad thing, as there’s a plethora of bargain players to sign.

So with that in mind, here’s the best bargain strikers who can score you the goals and save you the pennies.

We know you’re not convinced, but hear us out.

While he’s often failed to impress at club-level with Arsenal, Iwobi is an entirely different beast when it comes to Nigeria.

Famously netted twice in a friendly win over Argentina in November, he was also on target against England ahead of the World Cup.

And need we remind you he’s the nephew of the legendary Jay Jay Okocha?

When it comes to Poland, all you’re thinking about is Roberto Lewandowski, right?

But joining the big Bayern striker up front this summer is Milik, and he’s pretty decent as well.

Having suffered nearly two years of injury hell, the 24-year-old had a strong finish to the season for Napoli and netted five times in Serie A.

Will be sharp and hungry for goals in Russia.

Replacing Zlatan Ibrahimovic is never easy, but Berg has done a stellar job as Sweden’s main man up front.

His eight goals in qualifying made him the joint fifth-highest scorer in Europe, despite the fact that he plays his club football with Al-Ain in the United Arab Emirates.

Could be a surprise star at the World Cup, especially if Sweden make it out of their group.

No doubt you know all about this little goal-poacher already.

Hernandez, or Chicharito, averages nearly a goal every two games for Mexico (49 goals in 101 caps) and has scored at the last two World Cups.

He’s also had prolific spells at Man United and Bayer Leverkusen, but West Ham fans are yet to see the best of him.

If he has a good World Cup, he could become key to Manuel Pellegrini’s plans next season.

This guy’s spell at Anfield was largely forgettable, but he’s more than made up for it in La Liga.

This season, only Lionel Messi, Cristiano Ronaldo and Luis Suarez scored more in Spain’s top-flight, so we weren’t particularly surprised to hear him link up with the national team.

There’s no doubt that Diego Costa is their go-to starting striker, but Aspas can play as a winger or second-striker and will get his chance.

You can now officially sign up and start picking your teams after hundreds of thousands of you pre-registered in the last month or so.

How many teams can you enter and what can you win?

Each manager can enter a maximum of 10 teams while there is no option to buy more teams.

One extremely exciting new feature is the expansion beyond a UK audience, with fantasy football fans worldwide now able to enter.

Only UK players will be eligible to win the tasty £175,000 prizepot, with £100,000 going to the winner and the rest divided between the next nine highest scores.