This weekend is a real treat for fantasy football fans.

There’s a barrel-load of Premier League football to sink your teeth into, which includes the mouth-watering clash between Manchester United and Chelsea.

Jose Mourinho up against Antonio Conte, what could go wrong? 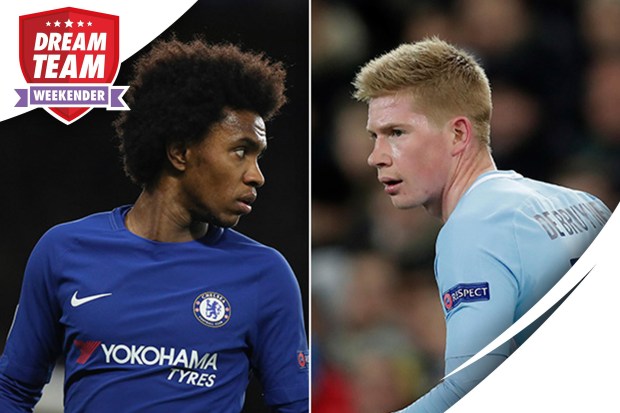 But if that isn’t enough to whet your appetite, then there’s the small matter of the Carabao Cup final between Arsenal and Manchester City on Sunday afternoon.

So, with all of that to look forward to, it’s a truly excellent opportunity to take advantage of Dream Team Weekender.

Weekender is our fantastic fantasy football game that is completely FREE to enter – and could win you up to £5k this weekend.

There’s also a chance to win a rather snazzy pair of Beats Studio3 headphones.

All you need to do is pick SEVEN players from the upcoming Saturday and Sunday games – including the Carabao Cup final clash – with no transfer budget and no limit to the number of players you can pick from one club.

We’re still a little hyped by DDG’s awesome performance between the sticks for Man United in their Champions League clash on Wednesday night.

The Spaniard was the difference against Sevilla, picking up an incredible 13 points on Dream Team and, more importantly, making sure the Red Devils kept that a clean-sheet.

Up against Chelsea on Sunday – a team he’s often excelled against in the past – he’ll be more than ready to pull off another show-stopping performance.

It’s been a fairly dire season for Arsenal so far, but at least Monreal is seemingly enjoying himself.

Following his first-half opener in the Europa League against Ostersunds last week, Nacho has been involved in a pretty impressive five goals in his last six games in all competitions.

And if that’s not enough, that record is as many as he’s managed in his previous 64 matches combined.

We reckon he could be a dark horse at the weekend.

Undoubtedly one of the players of the season and by-far the best midfielder in the Premier League, we can’t get enough of the new Ginger Prince.

Often the linchpin of Man City’s attacking play, only Mohamed Salah has scored more points than him from midfield on Dream Team this term.

Expect him to boss the centre of the park at Wembley on Sunday.

Outstanding during the week against Barcelona in the Champions League, Willian will surely keep his place in the Chelsea line-up as they take on United.

Against Barca, he rattled both posts and ran them ragged with his pace and technique, refocusing the attention away from the likes of Lionel Messi and Eden Hazard.

Because Aguero has been in red hot form for City this season, netting a stunning 29 goals in all competitions – including two in the Carabao Cup so far.

He’ll be the main threat in a star-studded line-up at Wembley, so much so that we almost feel a little sorry for the Gunners defence.