It was another fine weekend of fantasy football, wasn’t it?

Manchester City were the headline-makers once again with a tremendous 5-1 win over Leicester, while North London is officially white (for the time being, at least) following Spurs’ 1-0 win over Arsenal. 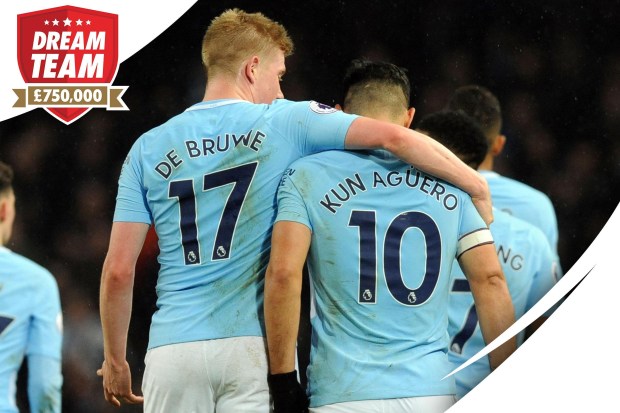 Also, Huddersfield fans will be very relieved with their side’s 4-1 win over Bournemouth, ending their five-game Premier League losing streak.

But what else did we learn from the weekend, and how can we apply it to our Dream Team line-up?

1 Liverpool already have that much sought-after striker

Last week, Liverpool legend John Aldridge told Sky Sports that Liverpool needed a 30-goal per season striker if they were to challenge Man City for the title.

Here is your 20-goal-a-season striker, that Liverpool was accused of lacking. In addition to that, he creates plenty of chances, is brilliant at pressing high and helping regain possession.

The ever-underrated Roberto Firmino is shutting all his doubters as we speak. pic.twitter.com/arOhZFGHAf

Lucky for them, they already have Roberto Firmino – who has now scored 20-goals so far with plenty of games still to play in the league and Europe – as well as the excellent Mohamed Salah.

The pair, once again, were Dream Team heroes at the weekend, with Firmino picking up 15 points and Salah 10 in the Reds 2-0 win over Southampton.

If you don’t have these two in your fantasy football team, then you’re doing it wrong.

2 Is Alexandre Lacazette the most disappointing player in the Premier League this season?

This time last year, Lacazette was one of the best strikers in the world, tearing the Ligue 1 apart as the spearhead of Lyon’s attack.

Fast-forward to the present day and he’s struggling for game-time in the red shirt of Arsenal.

The 26-year-old came on for Henrikh Mkhitaryan (who was pretty awful himself) on the 65th minute of the North London derby and look bereft of confidence, hitting a last-minute chance well wide.

Continually being substituted after 70 mins, using Iwobi and Welbeck behind him and expecting him to feed off scraps, do not tell me that Wenger is not responsible for Lacazette’s low confidence.

He was one of my most popular picks on Dream Team at the start of the season, but his poor form and lack of confidence is evident enough and nowadays he’s only in 16.4% of fantasy football line-ups.

He came to these shores with such promise, but right now he’s looking like one of the most disappointing players in the league.

3 Alexis is still settling at United

It was another difficult day in a Man United shirt for Alexis Sanchez.

The Chilean, who of course joined Jose Mourinho’s side from Arsenal in a straight swap for Henrikh Mkhitaryan in January, has failed to really justify his exorbitant wages so far.

On Sunday, he was once again guilty of giving away possession far too much – a staggering 36 times – in the 1-0 defeat to Newcastle.

What’s more, this picture of him failing to shoot in front of seemingly open goal has done the rounds on social media.

4 European football is BACK

The Champions League and Europa League (remember them?) are FINALLY back in our lives this week.

And as you know,  you can score some valuable Dream Team points by picking players involved in this season’s European competitions.

So, will Harry Kane do the business against Juventus? Will Sergio Aguero increase his Gameweek haul when City travel to Basel?

5 Serio Aguero is gaining on the leaders

For those of you who’ve picked Sergio Aguero for your Dream, then you already know.

The Argentinian, thanks to his FOUR goals against Leicester at the weekend, amassed am eye-watering 33 points in Gameweek 24.

A very valuable three points coupled with brilliant team play. And very happy for the goals ⚽⚽⚽⚽Thanks to everyone for your full support. C'mon City!!! pic.twitter.com/5HYzLwEFGw

But a few more performances like this and he’ll be breathing down their neck.