We’ve got fantasy football coming out of our ears at the moment.

Because just when you felt a breather was coming, the League Cup returns this week at the quarter-final stage.

But what transfers or changes should you consider making after the Premier League games at the weekend?

1 The League Cup strikes back

The football just keeps on coming – and you can’t neglect the cup competitions.

Arsenal, Manchester City, Chelsea and Manchester United are all in action and are well placed to make it a mouthwatering semi-final line up.

Whilst we expect all four sides to ring the changes there’s still a real opportunity for points to be earned.

The likes of Olivier Giroud, Gabriel Jesus, Michy Batshuayi and Marcus Rashford have all thrived in the competition so far and will be under the spotlight again.

2 Hammers ironing out their problems

West Ham are a pale imitation of their former vulnerable selves – and David Moyes deserves all the credit he can get.

Moyes has not only made the Hammers solid defensively but they added a clinical edge to their attacking play in the 3-0 win over Stoke on Saturday too.

Stoke 0 West Ham 3 First away victory this season 3 consecutive clean sheets. Out of the bottom 3 The players continue to give their all. David Moyes tactics have been spot on. The fans, in freezing conditions were amazing and deserved their day in sun. Well done. dg ⚒

Marko Arnautovic is beginning to repay that £25m fee and Manuel Lanzini makes them tick, with the Argentine notching all three assists at the Bet365 Stadium.

Lanzini may miss the next two games through suspension though, so Arnautovic – at just £1.7m on Dream Team – might be worth your attention.

Philippe Coutinho has been borderline irresistible in recent weeks and his Dream Team points return reflects that.

He is averaging that crucial Star Man award every other game at the moment and has hit two perfect 10/10 ratings with WhoScored.

And after his latest virtuoso display against Bournemouth on Sunday, Coutinho has become the most valuable fantasy football player this season.

He now averages 8.4 points per game – 0.4 clear of his nearest challenger Harry Kane and 1.2 clear of team-mate Mohamed Salah.

Amazingly, only 6.4% of Dream Team players have picked Coutinho this season – less than Daley Blind and Leighton Baines.

Why Coutinho is the MVP 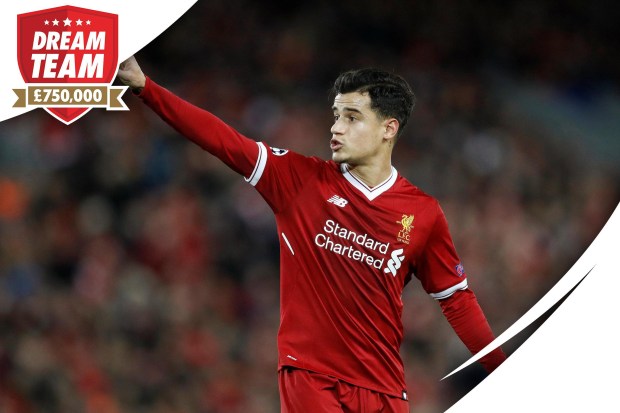 Crystal Palace were meant to be dead and buried by now after they started the season with seven successive defeats.

Announce Roy Hodgson… and even more so Wilfried Zaha.

Zaha embodies Palace’s revival under the former England manager and was vital again as they shocked Leicester 3-0 on Saturday.

The winger averages a goal or assist every other game and at £4.1m is an intriguing cheaper option for your Dream Team.

Watford have blown a bit hot and cold so far this campaign, but a couple of their players have really caught the eye.

Richarlison started the season brilliantly but, like the Hornets, has gone off the boil in recent weeks.

But Abdoulaye Doucoure has been a real constant.

Abdoulaye Doucouré has now scored more Premier League goals (6) than any other Watford player this season.

The midfielder has now scored six goals in 18 appearances and averages a rating of 7.22 on WhoScored.

Less than 1% of Dream Team players have picked Doucoure – so is it time to recognise his worth?

Why Coutinho is the MVP