Another fantasy football Game Week is dead and buried and we now have an outstanding candidate soaring ahead at the top of the points rankings.

It won’t really surprise you who it is either.

Harry Kane registered a massive 46 points in Game Week 6 alone – over half of his season total – to take his tally to 91 overall.

Imagine if he could score in August too?

He’s now 14 points ahead of his nearest competitor Romelu Lukaku, with the rest of the chasing pack not far behind.

But which bargain has seen the most movement amongst Dream Team players ahead of a mouthwatering Game Week 7?

Well one man really is silencing the haters from both outside and inside his club this season, and that’s Anthony Martial.

How has Martial performed on Dream Team so far this season? 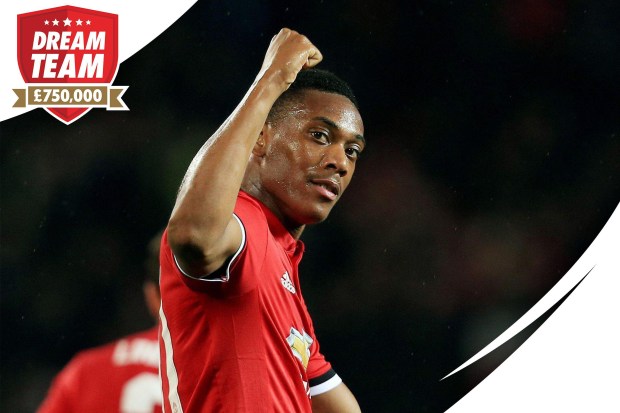 At £4.1m on Dream Team, Martial is comparatively a lot cheaper than other attacking options out there, with the likes of Kane, team-mate Lukaku and Alvaro Morata around £6m or much higher.

The Frenchman was being tipped to leave Manchester United in the summer, with Tottenham registering an interest in his services.

But Martial has repaid Jose Mourinho’s faith, scoring or assisting nine goals in all competitions so far.

Martial has alternated with Marcus Rashford on the left wing for Mourinho’s side, but the former Monaco star has been more effective than the English teenager.

And Dream Team managers are taking note, with Martial the fifth most transferred in player ahead of Game Week 7.

Only three players have scored more Dream Team points so far than the 21-year-old and that could extend considerably this weekend with United hosting basement side Crystal Palace.

Alvaro Morata or Gabriel Jesus? Why not both in this weekend’s huge clash?

That’s the beauty of Dream Team Weekender – there’s no budget limitations so you can pick both goal machines when Chelsea take on Man City in the biggest game of the season so far on Saturday.

That means you don’t have to worry about sacrificing different parts of your side to include two of the finest strikers the Premier League has to offer.

Just select seven players from across the Saturday and Sunday Premier League fixtures for your chance to bag that increased £10k prize this weekend.

MORATA OR JESUS? PICK BOTH WITH DREAM TEAM WEEKENDER