Fantasy football is very much back with a bang with the Premier League gracing our lives again this week.

Arsenal and Leicester get the 2017/18 campaign underway on Friday night ahead of what many expect to be one of the most exciting seasons yet.

With the arrival of Alexandre Lacazette this summer, it looks like poor ol’ Olivier probably won’t get much of a chance this season in the Premier League.

Despite scoring one of the goals of the season, Giroud never really got going last term as Arsenal had a less than flattering campaign

WhoScored, Dream Team’s ratings provider, gave Giroud a lowly 6.81 rating in the Premier League last season, while the majority of the Frenchman’s appearances came from the bench.

Following Chelsea’s signing of Alvaro Morata, it looks like big Diego is out of favour at Stamford Bridge as well as being linked with a move away from Chelsea.

Costa has been a constant first team regular and reliable goalscorer for the Blues since his arrival in 2014, but now faces the axe from Antonio Conte.

WhoScored gave Costa an impressive 7.41 rating in the Premier League last season, however it does look like the striker is out of favour at Chelsea and may be on his way out the door.

It looks as if Roberto Firmino is now Liverpool’s main man up front which may spark the end of Sturridge’s stint as a Liverpool player.

Studge never really gets a consistent run of a games in the league due to him always being on the treatment table which continues to see him missing for most of the season.

WhoScored gave Sturridge a rating of 6.67 last time out in the Prem as he made a grand total of 20 appearances last season, 13 of which came from the substitute’s bench.

Anthony Martial never really seems to be the star man at United despite being labelled as “the next Thierry Henry” when he joined from Monaco for £36m.

The forward has had two mediocre seasons at Old Trafford and looks to be out of favour for Jose Mourinho.

WhoScored gave Martial a 6.94 rating last season as he had an average campaign for the Red Devils.

Janssen was a complete flop for Spurs last season after he was bought as backup for Harry Kane.

The Dutchman signed for £18m from AZ Alkmaar but couldn’t manage to get a significant amount of goals last season.

WhoScored gave Janssen an abysmal 6.34 rating last season and with Kane on top form it’s unlikely Vinny will be able to wriggle his way into the starting XI.

The setup for Dream Team is quite simple – as a manger you get a budget of £50m to spend on your team of 11 players.

How did Philippe Coutinho perform in fantasy football last season? 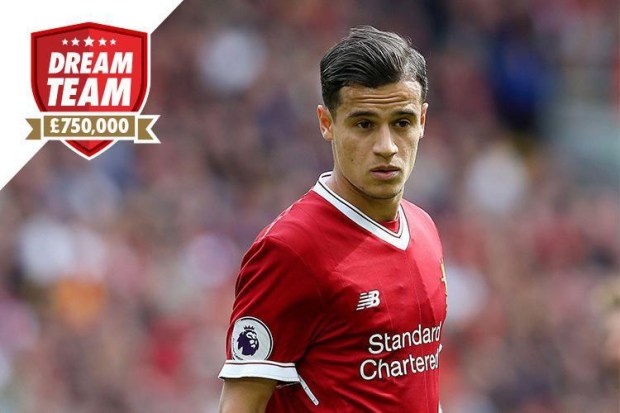 Team names have become almost as important as picking winning sides in recent years, with the punnier the better the general consensus.

Our most eye-catching bargain though? Joe Allen at just £2.0m.

After playing a big role in Wales’ run to the semi-final of Euro 2016, we were pretty surprised when Allen swapped Liverpool for Stoke last season.

But the Welsh wizard flourished with the Potters, scoring six goals last season as he continued his conversion from a sideways-passing anchorman to a dynamic box-to-box midfielder.

One of Stoke’s most consistent points scorers, Allen could be a decent yet affordable addition to your Dream Team.

Why is Alexis Sanchez such a fantasy football favourite?

The uncertainty surrounding Alexis Sanchez’s future at Arsenal this summer has been driving Gunners fans up the proverbial wall.

And it’s easy to see why too after their talisman racked up 348 points to be the best performing player on Dream Team last season.

Sanchez bagged a massive 31 goals and 10 assists for Arsenal in all competitions last and at times looked like he could single-handedly carry Arsene Wenger’s side into the top four.

Whether Sanchez appears in the red of Arsenal or (whisper it quietly) the sky blue of Manchester City this season, he’s still likely to be a huge Dream Team favourite.