Think you know who Portugal’s greatest ever player is?

It’s not even Cristiano Ronaldo.

It’s a man born in Humpata, Angola in 1918 and his name is Fernando Peyroteo.

He is, officially, Portugal’s greatest ever player.

But because we’re all so obsessed with trolling and tinder and tekkers these days, Peyroteo’s incredible achievements have all but been wiped from the record.

Did you know for instance, that the great Peyroteo’s record of 694 league goals is unsurpassed in Portuguese footballing history?

Eusebio, in comparison, managed a pathetic 474.

So what’s the story?

It all starts in the Portuguese colonies, specifically south-west Angola, where Peyroteo spent his youth.

From there, the promising footballer was lured by the talent scouts of Sporting Lisbon, who moved swiftly to see off competition for his signature to bring him to the Portuguese capital in 1938.

Later, officials from Porto and Benfica would attempt to gazump the deal with healthier financial offers, but Peyroteo – a man of his word – stayed loyal to Lisbon.

Upon arrival, Peyroteo was nothing short of sensational.

In his very first season he set a Portuguese record – which remains to this very day –  of scoring in 10 consecutive games at the end of the 1938/9 season.

In those ten matches alone, he hit a staggering 31 goals.

That’s more than one hat-trick per game, 10 games in a row. In his first season at a new club. 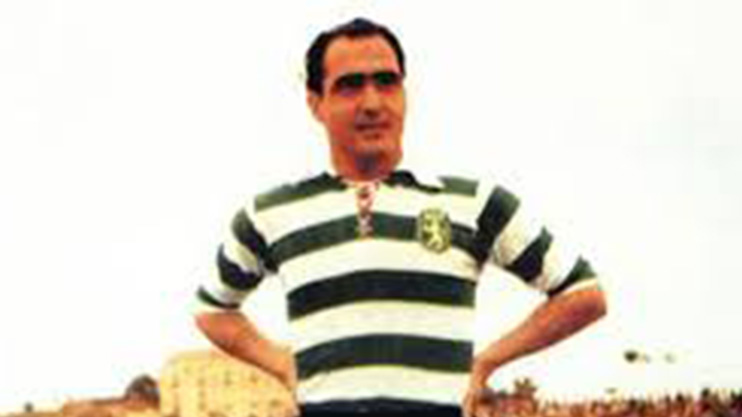 But Peyroteo was just getting started.

In the next 11 seasons in Portuguese football, he finished as the country’s top scorer now fewer than six times.

He was the most notable of all Portuguese centre-forwards

In fact, Peyroteo scored more than a goal-per-game in each of the 12 seasons he spent with the Lions, his greatest haul coming in  1946-7 when he hit 43 goals in a 26-game season.

He went on to win five league titles, five domestic cups and the first ever Portuguese Supercup, in 1944, when he scored twice in extra-time to secure a win against arch-rivals Benfica.

So what happened next?

Even after all that, Peyroteo’s legacy in Portuguese football wasn’t complete.

The forward retired at the age of 31 before moving into coaching and eventually becoming manager of the Portuguese national team.

It was an ill-fated reign, which was all too brief, cut short in its second game thanks to an embarrassing 4-2 defeat to Luxembourg.

But even in this two-game stint, Peyroteo managed to usher in a new era of Portuguese football.

For he was the man who gave Eusebio his international debut.

Crikey. He must be the most celebrated human in Portuguese football history?

In their centenary celebrations in January last year, Portugal held a glitzy ceremony to honour the country’s footballing legends.

Luis Figo was there.

They named Cristiano Ronaldo as their Player of the Century.

They doled out a Platinum Award to Eusebio.

They even handed out a gong to a beach soccer player.

And yet Paolo Futre, a man who stunk out Upton Park in nine goalless games for West Ham back in 1996, did.

Shame on you, Portuguese Football Federation.

Your own country might have disowned you Fernando. But we haven’t.

HE’S NOT THE ONLY FORGOTTEN GOALSCORER WITH A RECORD THAT’LL MAKE YOUR EYES WATER, YOU KNOW.