This will give Argentina confidence.

Argentina and Croatia will face off in their penultimate games of the group-stages at the World Cup.

It’s a tightly contested clash between Group D’s giants, which is made even more difficult to predict following Argentina’s underwhelming 1-1 draw against Iceland.

It’s not all doom and gloom for Argentina however, they have genuine reason to be optimistic against Croatia.

When you take a look into the record that Argentina strikers have against Croatia’s No1, Danijel Subasic, it makes for less than favourable reading for the goalkeeper.

The Monaco stopper has had a torrid time in the past against Argentina players, conceding seven times when he has faced them.

Subasic has come up against the majority of Argentina’s star-studded front-line during encounters for Monaco.

So far, Croatia’s No1 has leaked goals for fun against Sergio Aguero, Gonzalo Higuain and Angel Di Maria.

Aguero was the difference in Man City’s Champions League round of 16 first-leg clash with Monaco in 2017.

A double from the clinical forward past Subasic helped Pep Guardiola’s side to a 5-3 win on the night.

Why Sergio Aguero could be the difference against Croatia 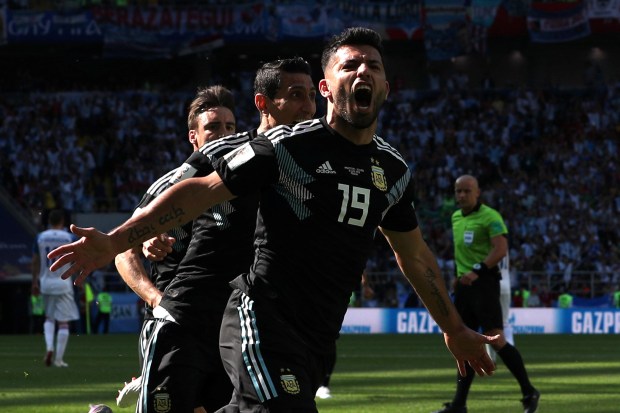 The Man City man is 5/1 with Sun Bets to score first against Croatia and continue his impressive record against Subasic.

Higuain netted twice against the Monaco goalkeeper in the Champions League for Juventus in 2017.

Angel Di Maria has also got the better of Subasic on three occasions, all coming in encounters for PSG.

The former Man United man helped the Paris club to win the Coupe de la Ligue in March, when he scored the second goal of the game in a 3-0 win over Monaco.

Di Maria also played his part in PSG’s emphatic 7-1 rout of Subasic’s and co in May, scoring once.

So far, out of Argentina’s star-men, Messi is the only one who is yet to score against Subasic.

The Argentina talisman will be making his first appearance against Subasic and will hope to continue the trend of Argentina players scoring for fun against him.

BACK MESSI TO SCORE FIRST AT 3/1 WITH SUN BETS