The World Cup hasn’t exactly been lacking in strange moments so far.

The ongoing subplot in almost every World Cup match has been VAR and whether it has been rightly or wrongly used.

Thankfully, for Poland’s sake, VAR wasn’t needed for a bizarre incident at a corner during their group-stage clash with Senegal.

For Senegal’s first corner of the match, they deployed a particularly interesting tactic.

Mame Biram Diouf was seen pulling the shirt of his own man, Salif Sane, at the set-piece.

Just why exactly he was doing this… we don’t have a bloody clue.

We all knew Senegal would be a bit of an unknown quantity going into the tournament, but did anyone predict something like this?

The tactic could be a clever way of giving Sane some added momentum to his running jump.

The centre-back stands at 6ft4 inches tall however, so would he really need any added momentum to his jump?

Could this actually be a rather unfavourable tactic designed by Alliou Cisse to get inside the head of the referee, forcing him to incorrectly award Senegal a penalty?

Later in the first-half, Senegal repeated the routine, with Diouf again pulling the shirt of Sane at the corner.

The bizarre routine almost paid off as Sane met the corner but saw his header sail just wide.

This really has been the World Cup of set-pieces.

Aliou Cissé: Easily the most GIFable coach at this World Cup.pic.twitter.com/SpcDA3dSYo

I wonder what VAR would make of all this? 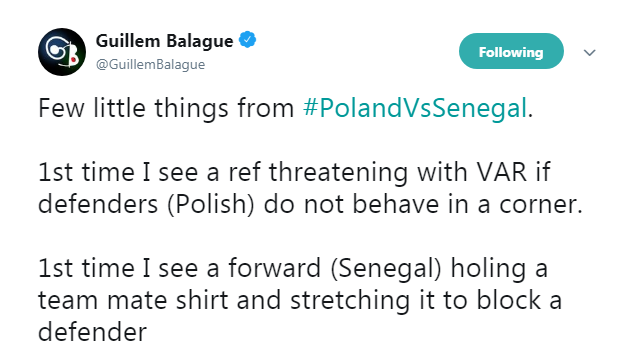