Luis Suarez is getting ready to sink his teeth into another World Cup.

Please excuse the pun, but let’s be honest; the infamous No 9 had it coming.

Uruguay’s centre-forward will go to Russia this summer as one of the world’s most well-renowned goal-scorers, but even with four years of relative good behaviour on his side; he can’t quite shake off the past.

Why Luis Suarez is a Dream Team World Cup must have 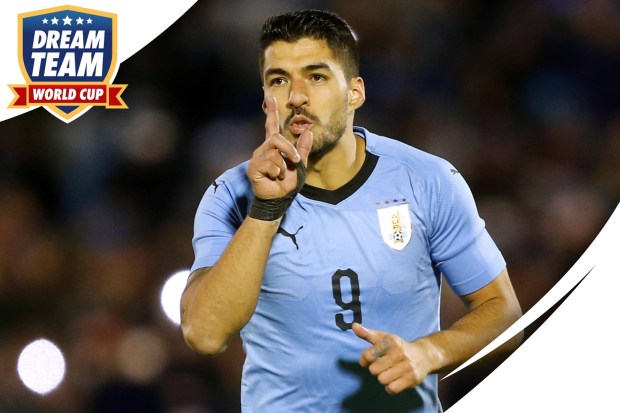 Playing alongside the dashing Diego Forlan at the 2010 World Cup, Suarez burst onto the scene as one of the standout players in South Africa, helping his country reach the semi-finals of the tournament.

But it was the dark side of Suarez’s game that overshadowed their overall performance.

Up against Ghana in the quarter-finals, he shocked the world with a blatant hand-ball on the goal-line, denying the African nation a certain match-winner in the dying seconds of extra-time.

Of course, he was shown a straight red card by the referee and Ghana were given their chance from the penalty spot, only for Asamoah Gyan to blaze his shot over the crossbar.

Watching on from the sidelines, Suarez celebrated the miss as if he’d scored a goal.

Earlier this year, Suarez spoke to his Barcelona team-mate Gerard Pique for The Player’s Tribune, and Pique asked the striker about the infamous moment.

And by this point, Suarez was widely considered one of the best forwards in the world, having lead Liverpool to within a whisker of the Premier League title that season.

He won a plethora of individual plaudits as a result, including the Player of the Year award, the Premier League Golden Boot and the European Golden Shoe.

He was even ranked number one on “Europe’s most influential player” list, ahead of Lionel Messi, Zlatan Ibrahimovic and Cristiano Ronaldo.

But in that time, he’d also been involved in a number of unsavoury incidents.

In October 2011, he was accused of racially abusing Patrice Evra in a match against Man United, resulting in an eight-match ban and a £40,000 fine.

Two years later in a match against Chelsea, he bit his marker Branislav Ivanovic – the second time he’d bitten an opponent in his playing career – and he was consequently banned for ten-matches.

I'm sad for what happened this afternoon, I apologize Ivanovic and all football world for my inexcusable behaviour. I'm so sorry about it!!

And it was the same story in Brazil.

In Uruguay’s second group game of the World Cup, he scored both goals in their 2-1 win over England, leading them to the brink of the last 16.

But in their final group game against Italy – needing a win to assure progression to the next round – Suarez once again showed the other side to his game.

With the scoreline goalless going into the final 10 minutes, Suarez clashed with defender Giorgio Chiellini, seemingly lunging at the Italian and biting his shoulder.

Even in the replays, you could clearly see the bite marks.

That summer, Suarez finally agreed his inevitable big-money move to Barcelona, but the transfer was overshadowed by the fall-out of the Chiellini incident.

Considering this was his third biting incident, Suarez was banned for nine international matches – the longest such ban in World Cup history – meaning he would miss the rest of the tournament, as well as the 2015 Copa America.

My apologies to Chiellini: pic.twitter.com/CvfkkjxzlM

As the summer ended and the new season began, Suarez was no where near Barcelona’s opening La Liga match.

Part of his punishment meant he was banned from turning out for his new employers for the next four months, meaning he could only appear in friendlies and take part in training.

Eventually, he made his debut for Barca in their El Clasico clash against Real Madrid in October – setting up the consolation goal in a 3-1 defeat – before establishing himself alongside Lionel Messi and Neymar in their attack.

On signing for Barcelona, Suarez promised fans that he’d never bite another opponent again and even revealed he’d sought professional help to prevent it happening for a fourth time.

In his autobiography – published later that year – he spoke at length about the numerous controversial incidents in his career and the work he did with sports psychologists to help his in-game outbursts.

“It was my fault”, he wrote. “This was the third time it had happened. I needed help.”

In his book, he discussed his traumatic childhood and the survival-instinct he learned while growing up, along with the adrenaline levels of the game and the mounting pressure to score goals.

As of this season, Suarez has notched 152 goals for Barcelona in four years.

What kind of World Cup will Suarez have?

Uruguay have been pitted against Egypt, Russia and Saudi Arabia in Group A and he’ll be tasked with leading the line for his country once again alongside the prolific Edison Cavani.

There’s high hopes for La Celeste, as their team is relatively strong in all areas and they’re favourites to top their group, but rated at just 28/1 to win the tournament.

But with Suarez in tow – who’s 22/1 to finish the tournament as top scorer and priced at £6m on Dream Team World Cup – anything is possible.