Antoine Griezmann was barely out of pre-school when the likes of Thierry Henry and Zinedine Zidane led France to World Cup glory in 1998.

But growing up, the world-renowned striker only had eyes for England and Man United winger David Beckham.

“He had a lot of class on and off the pitch. That is what I liked about him. No one had the right foot he had,” Griezmann told reporters in 2016.

Why Griezmann could light up this summer's World Cup 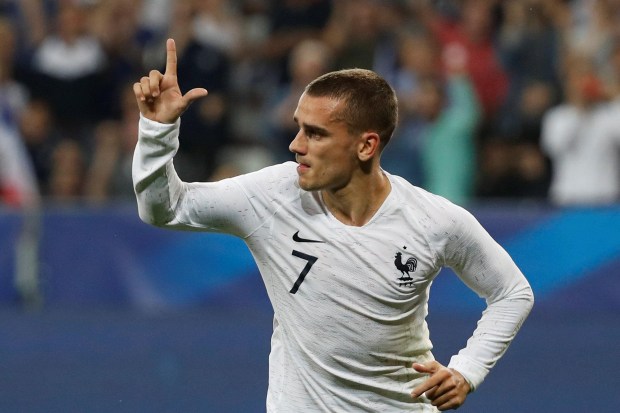 These days, there’s few in the game with more on-field class and off-field presence than France’s talisman.

Considered by many as one of the best players in the world, he’s also undoubtedly the most sought-after in the transfer market.

For well over two years, he’s been linked with the likes of Chelsea, United and Barcelona.

As a result, he’s fast-become one of the most recognisable faces in the game and arguably France’s most marketable sportsman.

In fact, it’s hard to walk down a street or open a magazine in France without seeing his piercing blue eyes staring back at you.

But like so many greats of the game, it very nearly didn’t happen for him at all.

As a youngster, he was rejected by several clubs across France due to his small size and lightweight frame.

Eventually he was spotted by scouts from Spanish club Real Sociedad, who offered him his big break with a youth contract.

But by playing his football in Spain, Griezmann went largely unnoticed by France’s youth coaches and it wasn’t until 2010 that he was called-up for the under-19 squad.

But at one point, he very nearly switched his allegiance to Portugal.

Born to a French father and a Portuguese mother, Griezmann’s footballing talent no doubt comes from his tough-tackling grandfather Amaro Lopes.

Lopes played for Paco de Ferreira in the Portuguese top flight, before moving to Macon in east-central France where Griezmann grew up.

Fast-forward to 2012 and Griezmann found himself in the midst of a nasty fall out with France’s football federation.

Embarking on a late night taxi ride to Paris with a few of his teammates, the youngster broke curfew and faced a lengthy suspension.

It was at this difficult time that he seriously considered switching sides.

But he stayed true to his roots.

Griezmann is adored in his home country, becoming a fan favourite during Euro 2016.

For a nation that was still hurting from the Paris terrorist attacks in November 2015, Griezmann became a symbol of hope.

At the time of the attacks, he was on the pitch in the now-infamous friendly clash against Germany at the Stade de France, where the explosions could be heard from inside the stadium.

Closer still, his sister Maude was a survivor of the horrific siege at the Bataclan theatre.

Griezmann would go onto win the Euro 2016 Golden Boot and was named the tournament’s best player, while the image of him crying at full-time in the final became one of tournament’s most enduring images.

“We again have a hero. What a player he is,” exclaimed Thierry Henry, following his performance in the semi-final victory over Germany.

Two years on and France go to Russia as one of the favourites to win the World Cup.

Their young and exciting squad – which includes the likes of Ousmane Dembele and Kylian Mbappe – will be one of the teams to watch this summer.

But it’s Griezmann who’s talked-up as their star man, comparable to the likes Michel Platini, who led France to victory at Euro 1984, and Zidane, the architect of the 1998 World Cup campaign.

But France can count themselves lucky to even be in Russia.

They finished four points ahead of hapless Holland, but an away defeat to Sweden and dropped points against the likes of Belarus and Luxembourg threatened to complicate their progress to the finals.

It took the heroics of Griezmann in the decisive group clash with Belarus to secure their place, as he notched both the opening goal and the assist in a hard-fought 2-1 win.

For Atletico, Griezmann has hit an impressive 25 goals and 15 assists in all competitions this season, with Diego Simeone’s side finishing as runners-up in La Liga and winners of the Europa League.

Ending the season with a WhoScored rating of 7.38, Griezmann was the sixth-best goalscorer in Spain’s top-flight and was named Star Man a brilliant eight times.

Unsurprisingly, he’s one of the more pricier options on Dream Team’s World Cup game at £6.5m, but he’s cheaper than the likes of Lionel Messi, Cristiano Ronaldo, Neymar and Sergio Aguero.

Considering his brilliance at Euro 2016 and his current status as one of the best goal-scorers in the world right now, we think he’ll make a worthy addition to your attacking ranks.