It speaks volumes that a player can even be mentioned in the same breath as Lionel Messi and Cristiano Ronaldo.

But earlier this season, during the Portuguese great’s uncharacteristic slump in front of goal, that became a reality as Neymar pressed to move ahead of Ronaldo in the pecking order. 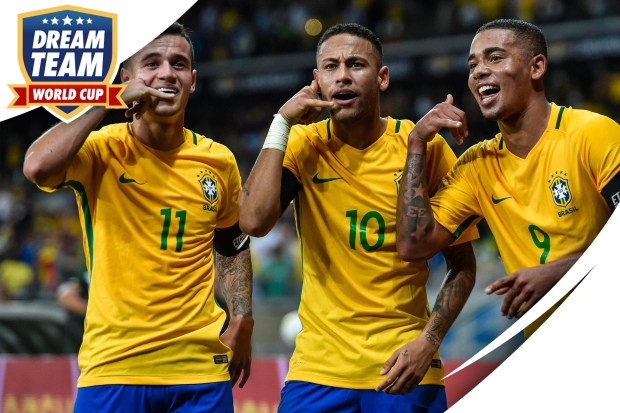 His phenomenal first season with PSG was curtailed when he broke his foot at the end of February, but he has pledged to recover and lead Brazil at the World Cup this summer.

Brazil, despite boasting the likes of Philippe Coutinho and Gabriel Jesus, are simply not the same animal without their poster boy.

Ever since Neymar started dancing his way around Brazilian defenders during his Santos days he’s been a marked man.

His stardom was evident way before Barcelona pounced in 2013, becoming a millionaire before his 18th birthday after his father engineered a deal with Santos.

This was back in 2010, when Brazil were crying out for a new magic man as Ronaldinho’s powers faded.

On his debut one report claimed he “set fire to the game” in a 30 minute cameo that saw every touch greeted with coos from an expectant crowd.

Neymar met with Chelsea’s representatives the day he made his Brazil debut back in August 2010, whilst Real Madrid are expected to renew their longstanding interest this summer.

There’s no denying he’s been the most coveted player on the planet in the last decade.

But Neymar’s ridiculous international form has ensured he remains a darling in Brazil too.

He has already brought up a half century of goals in just 83 appearances and it’s only a matter of time before he surpasses both Romario (55) and Ronaldo (63) in the all-time scoring charts.

There’s certainly a feeling that his agonising injury against Colombia in the 2014 quarter-finals ended Brazil’s hopes before their 7-1 massacre against Germany had even started.

Their inspiration and their talisman lay in a heap on the ground, and with his injury went the Selecao’s ambitions of an iconic home success.

Despite it’s minimal prestige he was revered for leading Brazil to an emphatic gold medal at the Rio Olympics in 2016.

And with Tite’s Brazil revolution in full swing right now, the 26-year-old is being tipped to banish the nightmares from 2014 and go the distance in Russia.

Brazil became the first side other than hosts Russia to qualify for the tournament, blowing away their South American rivals with seven successive victories.

All eyes will be on how Neymar responds to the disappointment of four years ago.

His stellar form prior to that injury in February suggests he’s well placed to, with WhoScored placing him as the highest rated player (8.99) in Europe this season.

Hypothetically he would have racked up 261 Dream Team points from just 27 appearances at an astonishing rate of 9.8 points per game.

To put that in some context, Mo Salah ran away with highest points scorer this season at 7.9 points per game.

If Brazil are going to shine there’s no question Neymar will have to be fit and firing.

And inspiring a sixth World Cup glory for his country would see him eat even further into Messi and Ronaldo’s legacy.